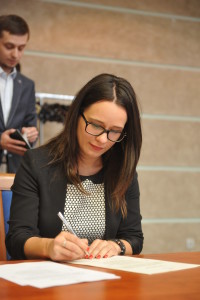 – In 2011 I graduated from the University of Szczecin, Faculty of Law and Administration at the faculty of law with the final grade 4.5 (in the scale of 5);

Within the MA thesis submitted and defended in 2011 “Protection of the interests of the owner of the mortgaged property” under the guidance of prof. Tadeusz Smyczyński under which I dealt with the issue of amendments to the Law on Land and Mortgage Act of 20.02.2011 r.

– In 2011 I obtained a positive result from the state exam, which organizes the Ministry of Justice and was entered on the list of trainee lawyers at the Szczecin Bar Association;

– In 2012-2014 I was a trainee lawyer at the District Bar Council in Szczecin under the patronage of attorney at law Anna Bugaj – Bek;

As part of the state training I supported lawyers and worked with law firms from across Poland in fornt of district, reginonal and appellate courts, law enforcement agencies, state agencies, local governments and other institutions.

– In 2015 I passed the bar exam which organizes the Ministry of Justice and was enrolled as a lawyer at the Szczecin Bar Association;

– In 2012-2013 I graduated from the postgraduate studies at the University of Szczecin at the Faculty of Philology “Translators’ School” in the faculty “Professional translation – Law and Economics” within which I have performed translations of acts of private and official documents relating to criminal, civil, family, inheritance and commercial law as well as economic texts both in writing and orally.